The original St Faith’s church was built about 1150 on what may be the site of an earlier Saxon church. The adjoining graveyard provided the parish of Havant with its only burial ground for those of any religious denomination. The parish records covering the period from 1653 to 1851 record some 6,000 burials there and from this figure it has been estimated that the graveyard could well contain the remains of over 20,000 people. By the 1850s it was decided that no more burials could be carried out there so a new site would have to be found.

Between 1700 and 1800 many Independent Chapels were built either with graveyards attached, or with separate ones adjoining public churchyards. When a Church of England burial ground becomes full it can be declared ‘closed’ and the responsibility for its maintenance, but not control, can be transferred to the local authority and this is what has happened with the St Faith’s section. However there is no such provision for burial grounds of other denominations and therefore the Dissenters’ section remains the responsibility of the United Reformed Church. However in 1929 the council agreed to maintain it for a fee of £5 per year. Although £3 was paid in 1930 there is no record of any money being paid since and when this was realised in 2007 the council ceased to maintain it. 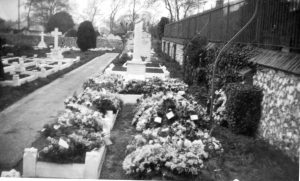 Additional information is available from a booklet compiled by Ralph Cousins

The Havant Cemeteries at New Lane and Eastern Road

This is a summary of an article in the Hampshire Telegraph (9th May 1896):

HAVANT NEW CEMETERY CHAPEL Public dedication of new Havant Cemetery. Alfred Edwin Stallard, surveyor to the Council, designed the chapel at a cost of £600. Built in the decorative Gothic style, of flint and Bath stone, lined inside with pale primrose bricks and Rowland’s Castle red brick dado. The roof was open-timbered and covered with Broseley tiles.

The chapel was destroyed by fire some time after 1950.

Thanks to Ann Griffiths for supplying this information.